5 Reasons Disney’s Skyliner is the Way to Go!

Disney World recently introduced a new form of transportation that takes you on a high flying journey to multiple parks and resorts. The Disney Skyliner opened in Fall 2019 with some initial hiccups but has fast become one of the most popular ways for travelers to get around different Disney properties. Here are the top 5 reasons you should give it a try.

Added Value for Pop Century and Art of Animation (and Caribbean Beach!)

One of the biggest drawbacks that the Value Resorts have faced is the lack of transportation options and the length of time it can take to get to parks, let alone other resorts. For Pop Century and Art of Animation, the Skyliner is a huge benefit that takes transportation from a negative to a positive. A mere two or three minute walk from most of the rooms at these two resorts you’ll find the entrance to this state-of-the-art transit system. Disney’s Skyliner starts at these resorts so you won’t hit any congestion from other travelers lining up to get into a gondola or switching between Skyliner routes.

On the other end, the Caribbean Beach is right in the middle of the Skyliner where you can switch routes at this central station between Epcot or Hollywood Studios. There may be more congestion at this point (again mainly first thing in the morning or last call at night). But the location makes the trips to either of the parks extremely quick. This makes it a no brainer for guests staying here to use the Skyliner versus waiting for a shuttle or scheduling a Minnie Van.

RELATED: The Unforgettable Art of Animation 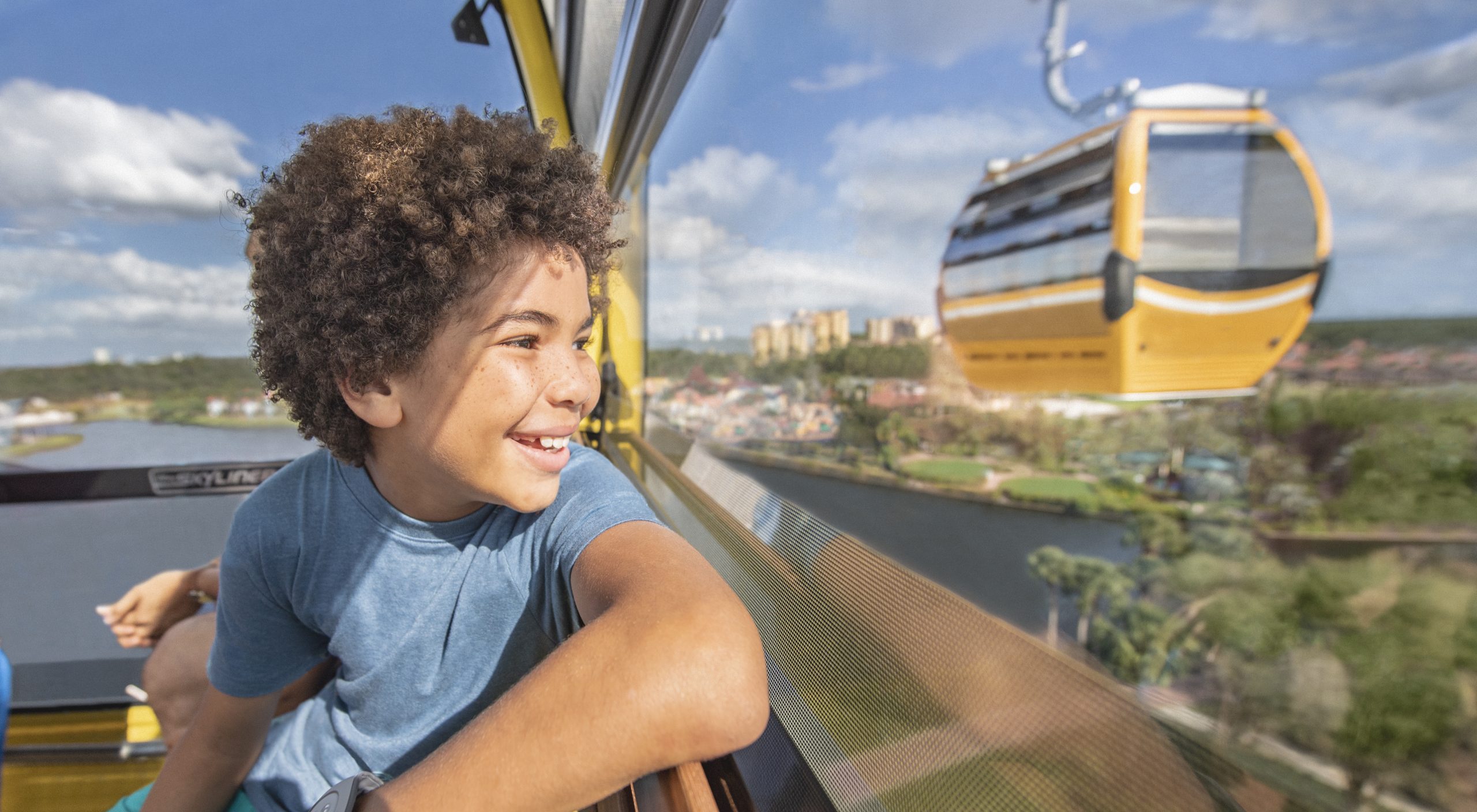 Disney World’s two growing parks, Epcot and Hollywood Studios, are the main reason for the Skyliner addition. Both parks have large expansion plans in the coming years so their popularity is likely to increase. Hollywood Studios previously did not have any extra transportation outside of standard shuttles and car service. Epcot, on the other hand, has benefited from additional transportation due to being on the Monorail track. In the end, the Skyliner will provide the quickest transportation for guests that have easy access to the gondola system when traveling to both Epcot and Hollywood Studios (or between these two parks)!

Whether you have young kids or you are a young kid at heart, the colorful gondolas found on Disney’s Skyliner will put a smile on nearly everyone’s faces. Each gondola is painted a bright color and stands out as it cruises through the sky. Many of the gondolas are also wrapped with different Disney characters. These vinyls cover the windows and include sets of characters from movies such as Frozen, Peter Pan, Star Wars, and Toy Story. You’ll find classic characters as well, like Mickey, Minnie, Goofy and Donald Duck. This creates a fun guessing game to see what characters you will be riding with on your next trip on the Skyliner!

The Skyliner also provides access to Disney World’s newest resort. The Riviera Resort falls on the Epcot line of the Skyliner, near the line exchange station, which means a quick ride to both Epcot and Hollywood Studios. It also means quick access between the resorts on the Skyline for exploring other resorts and restaurants during your stay. 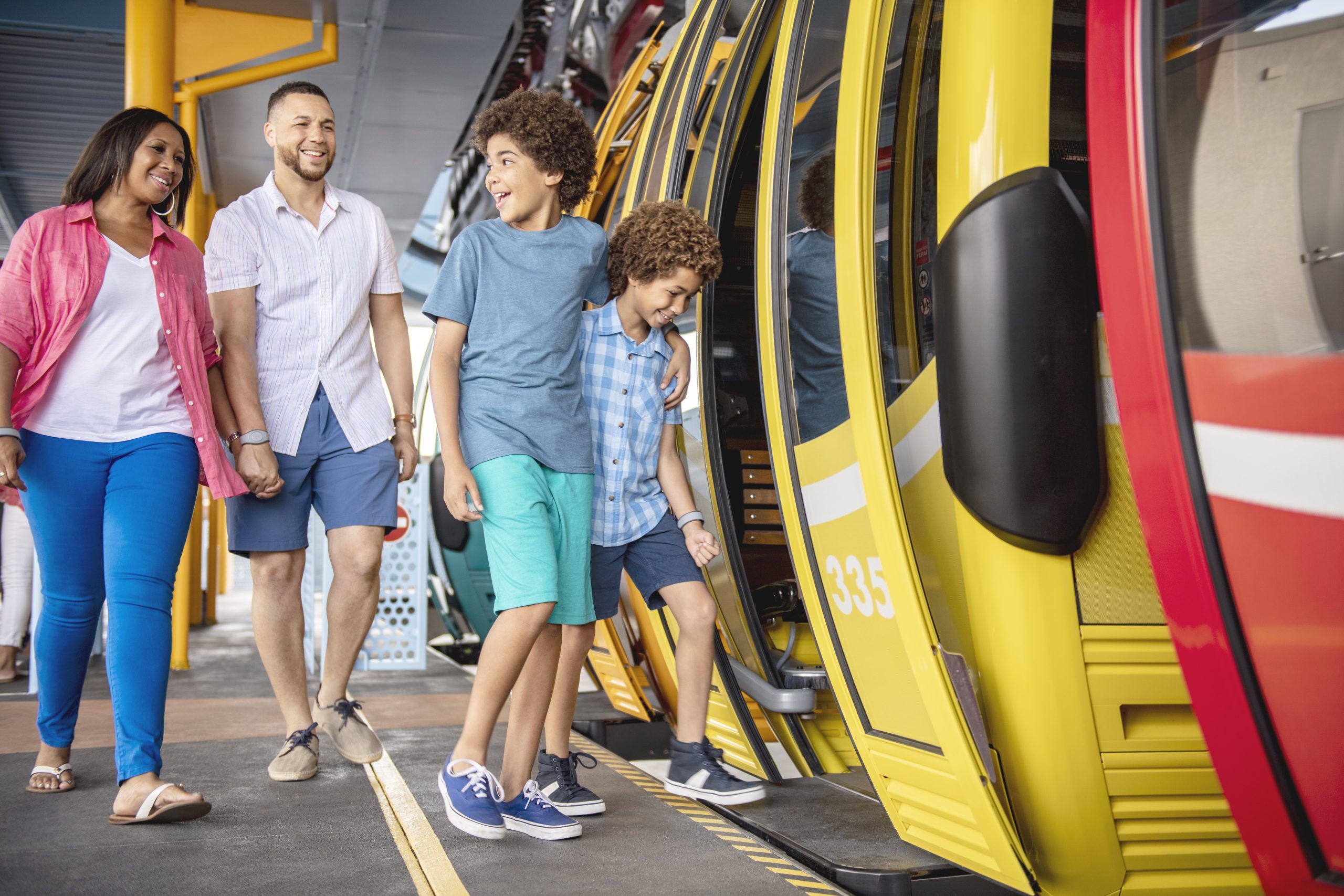 One huge advantage of traveling on Disney’s Skyliner is the ease of access for families. Most Gondolas fit up to ten people, unless being used for handicap transport. They even have enough room to bring aboard strollers. Single strollers can be pushed straight onto the gondola, while double strollers will need to be folded up. The seating inside each gondola consists of two benches, one on each side of the vehicle.

Typically you will be able to walk right on without waiting and have privacy for your family (unless riding at park open and close). This is much less stressful then loading up on a shuttle and worrying about space for your things and for seating near each other (especially with young kids!). In addition to the ease of access, trips to the parks and resorts on the Skyliner route take much less time than other modes of transportation available to guests.

Bonus: The Skyliner is TOTALLY Free…

Unlike Minnie Vans or Uber services, you wont pay anything to ride on Disney’s Skyliner. It truly is a luxury ride compared to the bus transports, so the fact that it is free makes it absolutely irresistible.

For our family, this has quickly become our favorite transportation. We highly recommend including a ride on the Skyliner in your Disney vacation plan. Tell us your thoughts in the comments below! Are you excited to experience this unique system? Have you had any experiences on the Skyliner? We’re excited to hear other’s experiences!